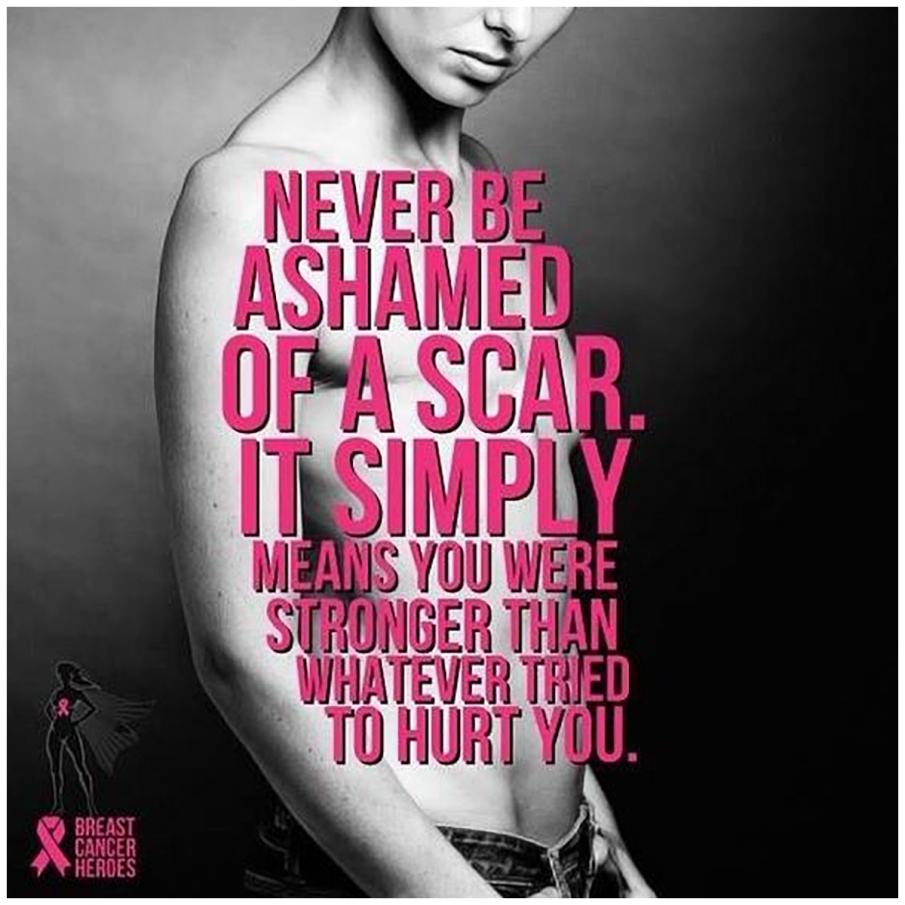 We all have scars. They are part of growing up. They are part of life and when we look at them we remember how we got them. I have a scar on my right knee from where I crashed my bicycle racing my brother to play mini-putt. I have a scar on my left thumb from where I burnt myself on hot oven doors working at the Ponderosa as a teenager. We had a routine where we yelled “Hot doors, hot pan, hot drawer” to warn everyone on the line, that there were piping hot trays of baked potatoes coming out of the oven to be dumped into a warming drawers. Some scars make us smile when we think of how we got them and some scars we’d really much rather forget.

I used to have a small scar on my right breast. I was attacked one night coming out of my universities’ campus pub. I was jumped by a fellow student who followed me to my car. I was roughed up, assaulted and cut. If it wasn’t for my best friends Jock and Harris coming to my rescue with a tire iron, I don’t know what would have happened. I never reported the incident. I never even told my parents. I was afraid that it would reflect badly on me. I thought it would affect my standing at university. I thought people would think less of me if they knew and I was worried that maybe I would even have to quit school… so I hid it, kept quiet and dealt with it the best I could. Every time I saw that scar, I thought about what happened. It took a very long time to get over that trauma…but I did. Over the years, that scar, that caused me so much fear and pain faded and my ability to keep the memories of that night from upsetting me, became easier. That incident did not rule my life but the memories, like the scar remained as a reminder of what had happened. It was always there, although faded.

Some scars go too deep to be forgotten. That scar on my breast doesn’t exist anymore. It was cut away and replaced by much bigger, deeper and visible scars. First from my mastectomy where all my breast tissue was removed and most recently from the reconstruction surgery to insert my implants. Two red, jagged, eight inch scars have taken its place. Two reminders of what having breast cancer does did to me and all those affected by it. It left physical scars…and created very deep emotional scars. Breast cancer  cuts you to the core. It assaults your body and your spirit …and not even friends with a tire iron can save you from that. But like that time so many years ago, I survived. I have not and will not let these scars dictate how I deal with the rest of my life.

My scars tell a story. They are a reminder of when life tried to break me…but failed!